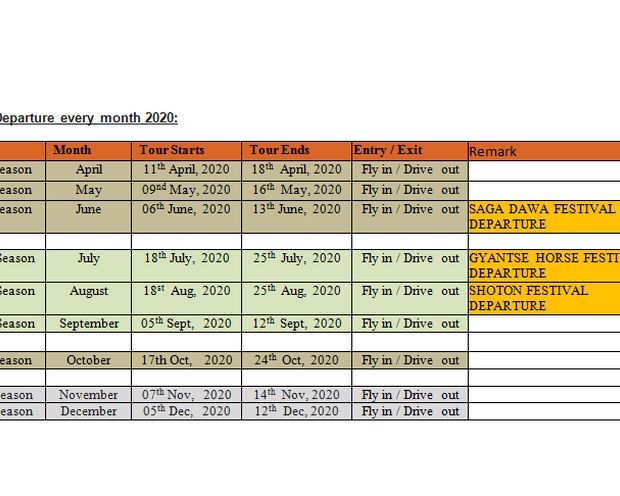 Tibet -a land so rich in Culture, tradition and steeped in religion along the far flung unique landscape, also called the roof of the world. Visit to rural part of Lhasa, visit Tibetan Family and if available explore Nomad community nearby with their herds of Yak and sheeps.

The tour begins with a comprehensive trip briefing in Kathmandu followed by a sensational trans Himalayan flight to Lhasa that passes over Mt. Everest and many highest peaks of the world (if you join the tour in Kathmandu). This is the only flight fly over Mt. Everest and other highest peaks. In case you wish to start the tour in Lhasa arriving from anywhere in mainland China or taking a new train from Beijing

You will meet  by your Tibetan guide at Gongkar Airport. After immigration formalities, you will be driven to Lhasa (3660 meters). It takes around 45 minutes to reach the old city. After checking in at your hotel, you are advised to take rest and take it easy. Drink plenty of fluids and let your body get used to Lhasa’s high altitude. You can go around the hotel area for light walk and sightseeing. O/N at Hotel in Lhasa (BB)

After breakfast you will be briefed about the day’s program. Then your guide will take you on a tour to Jokhang Temple, Sera Monastery and Barkhor Market respectively.

Jokhang Temple: Jokhang a seventh-century geomantic temple at the heart of Lhasa is the most sacred temple of all Tibet. It is considered to be a Power Place in all Tibet. Queen Bhrikuti, a Nepalese princess married to King Songtsen Gampo founded Jokhang Temple and in recognition of Queen Bhrikuti the main gate of the temple faces west towards Nepal.

Sera Monastery: This monastery is approx. 5km drive away from Lhasa. Sera Monastery was founded in 1419.  It used to be an important center for learning where in the past approx. 5,000 to 6,000 monks resided. Currently about 550 monks are supposed to be living there. The important structures inside the monastery include Coqen Hall, (the main assembly hall), three Zhacangs (Buddhist colleges) and twenty-nine Khangtsens (monk dormitories).The most intriguing feature here is the nine-meter image of Maître which was erected in 1419

At the end of the day your guide will escort you back to your hotel. Lhasa offers variety of Restaurant for both Lunch and Dinners. O/N at Hotel in Lhasa (BB)

After an early breakfast, you will be escorted by your guide to the majestic Potala Palace and the beautifully landscaped Drepung Monastery.

Potala Palace: This Palace is also known as the “winter palace”. The imposing structure of the palace dominates the landscape of Lhasa. is a 13th storied complex monument rising to a height of above 117m which houses 10,000 shrines and over 200,000 images and about 1000 rooms.As you are guided through the ancient chambers of the palace, you get to see Tibetan art at its best. The Potala Palace has a vast array of intricate Tibetan murals and beautiful statues.

Drepung Monastery: This Monastery is 8 km west of Lhasa. One of the three great Gelukpa Monasteries near Lhasa, the other two being Sera and Ganden. Until the occupation it served like its two sister monasteries as centre for learning and monastic training to which monks from all over Tibet would come to spend as long as 15 years methodically studying and debating the meaning of the Buddhist scriptures. For centuries it existed as a small monastic township housing thousands of fully ordained monks and other functionaries.

Tibetan Village Tour : Shal is located approx 10 km (half an hr drive) east of Lhasa with population with approx 150 families. Shal is an old Village town and most of the people are farmers or nomads. Village is quite popular for potato and barley farming and now interestingly, they have started involving locals, domestic clients self farming. One can go for an hour hike up the village where a holy mountain is located standing up tall overlooking the village. The place offers a breathtaking view of the high mountains, fresh flowing stream and the open green pastures.  The best part of this hike is the opportunity to see the nomad’s community, during summer time from May to October when they live in the pastures grazing their cattle. After detail visit you will drive back to hotel. O/N at hotel in Lhasa (BB).

Note: Since only a limited number of visitors are allowed inside the Potala palace every day, the order of sightseeing places will be decided upon by your guide.

Moving along the Friendship Highway, you drive past Khamba La, at 4970 meter with a brief halt to savor majestic views of Yamdrok-Tso Lake and Mt. Nojin Kangsang, standing at 7191m. On turning westwards, you come across another pass, Karo La at 5045m. After driving 265 km, beautifully landscaped Tibetan villages become visible as you enter the town of Gyantse, an old Tibetan Town against a backdrop of magnificent 14th-15th century fortresses and temples. Here we will visit Khumbun Monastery and Pelkhor Chode Temple.

Pelkhor Chode: Work started on the monastery by Rabten Kunzang in 1418 under spiritual guidance of Tsongkhapa’s disciple Khedrup Je, and was completed seven years later in 1425. Remarkably preserved, many statues and paintings inside date back to the time of its founding. Although the shrines are predominantly Shakya, it was traditionally unaffiliated and used as common assembly place.

Kumbum: Rabten Kunzang in July 1427 embarked on his most ambitious project – the construction of the Kumbum (or Tashi Gomang Chöten), which was probably completed in 1439. The gilded copper roofing and the final consecration ceremonies, however not completed until 1474. The term Kumbum means having 100,000 images and refers to a particular style of stupa construction in which chapels are housed in ascending symmetrical stories.After detail visit you will drive back to hotel. O/N at hotel in Gyantse (BB)

Note: Opportunity to experience the Yak Ride (Yaks are found mostly over 4000m elevation and is the most important animal in Tibet) and see Tibetan Mastiff Dog in Khampa La pass (extra cost).

After exploring Gyantse, you will take a 90 km drive to Shigatse.  En-route we drive approximately 6km off the main highway to visit a very important ancient Monastery. Later drive to Shigatse, second largest city of Tibet. Tashilumpho Monastery being one of the largest functioning monasteries in Tibet is a major attraction of Shigatse.

Shigatse the capital of Tsang Province was one of the first towns to be visited by westerners due to close distance with the Indian border. Here in Shigatse you will be visiting Tashilumpho Monastery. This monastery is one of the largest functioning monasteries in Tibet and there is much to explore within its high surrounding walls. There are about 39 amazing chapels inside including the huge Maitreya Chapel coated with gold; its workmanship certainly impresses everyone.After detailed visit of Shigatse, we will visit the local markets for shopping and local sightseeing. O/N at Hotel in Shigatse (BB)

Today you will travel along the Friendship Highway amidst picturesque landscape driving for approx 7hrs. You will be crossing one of the highest Gyatso la pass (5220m) of the tour; you will come across many nomads together with Yak’s Ship. Today you will traverse along the Friendship Highway amidst picturesque landscape driving past small town of Lhatse and Gyamtso La pass at 5220m. As the route opens into plains, many monasteries and camps of nomadic herders become visible en route to Shegar. O/N at Hotel in Shegar (BB)

After breakfast you will drive along Peku Tso (Lake) and arrived Dzonkha (Kyirong Xian), then drive further 70km cross high pass Yangdo La 5326m/17470ft to Nepal border town of Kyirong. Kyirong is also a famous religious and historical place, home of 11th Centaury great saint and Guru Milarepa known for his tantric wisdom as well a poet and folk singer, his song are still remembered by local herdsman and villagers. O/N at Hotel in Kyirong (BB)

After breakfast, drive 25 km to the border and the immigration point. After Chinese Immigration formalities we cross into Nepal by foot and meet Nepali representative and vehicle at the Nepal side called Timure, Rasuwa Ghadi. After Nepali immigration formalities, you drive to Kathmandu. It is an interesting combination drive of dirt and paved road along the Langtang national park through smaller townof Syabrubensi and Dunche (ideal place for lunch) and finally reaches the main national highway at Galchi. You will experience more traffic along the road. Tour Concludes.

Service Excluded
Tibet visa fee as per nationality.
Airfare: Kathmandu - Lhasa (US$ 200 - US$ 450) P/P.
Travel Insurance.
Expenses during any rescue operations.
Nepal Visa fee.
Lunch and Dinner (US$ 10 person per meal).
Alcoholic beverage and bar bills.
All expenses of personal nature, phone calls, laundry etc.
Gratuity to staff approx. Total Guide US$75 and Driver US$50.
Services of potterage and other vehicles in between in case of Landslides and other natural calamities beyond our control and expenses incurred during rescue services.
Airport transfers in Kathmandu.
Services not mentioned herein.